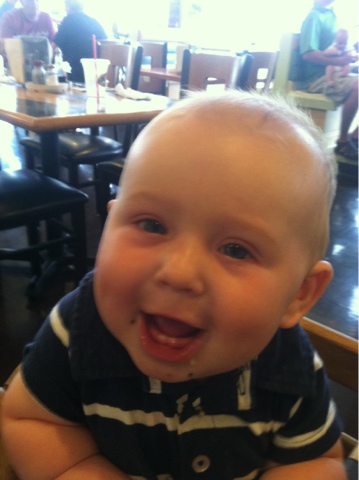 Isn't he cute with those fat rolls and little dimples??!!!  I can hardly get enough of him!  I wonder if he's sick my kissing him every single chance I get!  I just can't help it...he's so squishy! 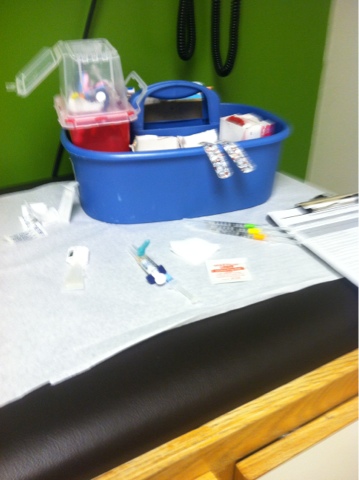 Today at his 6 month check up he had to get shots.  ALOT of shots!  One oral and the other 5 by needle.  Apparently, they ran out of a couple of the shots that could be combined into one shot...SO, he got all five at once!  Poor little guy!  He was NOT a Happy Camper!

He sure is fun!  HEAVY, but fun!  He likes to eat these little fruit packets of food that he can just suck down.  He loves pasta and it's so adorable the way he just sucks into his little mouth.  He loves to try and drink out of whatever cup you are drinking from.  He definitely knows the sound of my voice and looks for me all over the room if he hears it.  Then regardless of how happy he was before he starts whining until I'm holding him!  I think this is the beginning of a LONG road ahead for me! He loves to watch his brothers.  He loves to army crawl and he's getting pretty fast at it.  He loves to try and eat paper.  It's really hard to change his diaper because he wants to turn onto his belly and try to get away.  He's learning to turn the light switch that turns his ceiling fan on and off.  He loves the white blankie that was once's Jack's and Jaden's.  He loves to put the little edges on his face, like Jaden.  He HATES and I mean HATES his carseat.  He's getting better at taking naps on a schedule, but if he gets a power nap, it's almost impossible for him to go back to sleep.  :(  for me!  I think I'm running out of milk and it's a good thing he's starting to take a bottle.  Speaking of sleep, he's still not sleeping through the night.  I believe this is an error on my part.  I'm sure he could do it, but it will require us to ferberize him.  Something we didn't have to do with Jaden.  :(  I really dislike the ferberizing method because I hate to hear him cry.  It's so sad.  His hair is RED...that's right...RED.  It's too soon to say whether or not it will fall out and be blond like the others, a strawberry blond like my dad or if this RED is going to be a permanent thing.  When he wants to be picked up he starts flapping his arms.  He loves to sit up and can do it by himself very well.  Sometimes it looks like he's working on his core.  I think he has abs somewhere under all those belly rolls!  Until the next checkup...that's it for now.