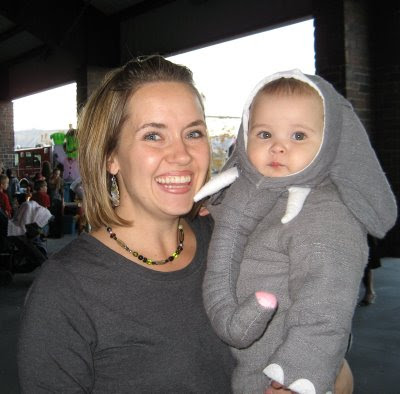 Happy Happy Birthday Camilllllle Dear....happy days will come to you all year..."

I just wanted to wish my sweet Camille a very happy birthday today. She is so dear to my heart. She is very selfless and always so giving of her time and energy. She has so many talents...and I am so happy that I get to sometimes be on the receiving end of some of them. :) She is a doer and makes me want to try to be a better person. She is one of the most amazing people I've ever had the privilege of knowing. I am grateful every single day that she is in my life! I don't know what I'd do without her. I Just LOVE you girl! :) Hope you have a GREAT birthday! 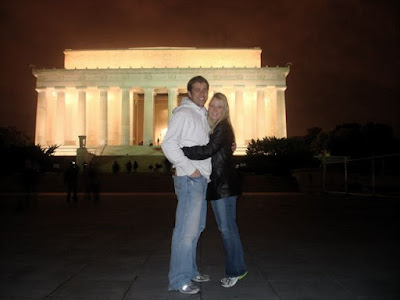 Just a little squeeze in front of the Lincoln Memorial. 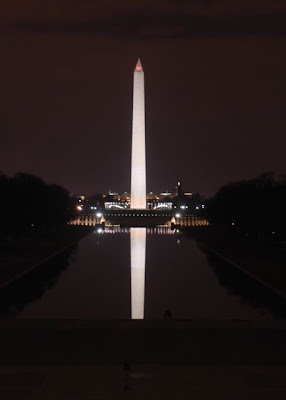 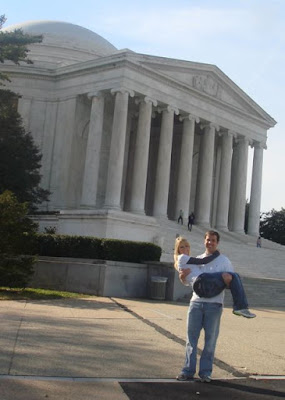 Going to all the Jefferson Memorial was really cool. It was so amazing to me that our country was so blessed and most choice because it was reared by god fearing men. It makes me sad to see that so much has changed since those times long ago. Our country is so obsessed with making sure that EVERYTHING is! so politically correct in an attempt to not "offend" someone. I am grateful for the many advancements made by our country...but I wish our morals and values once held sacred by so many didn't have to suffer. Just another sign of the times I guess. 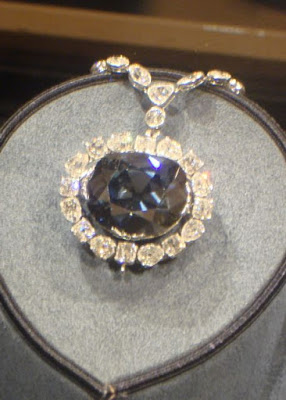 I tried convincing Coby that I needed this...and got an astounding...absolutely NOT! The NERVE!!!! 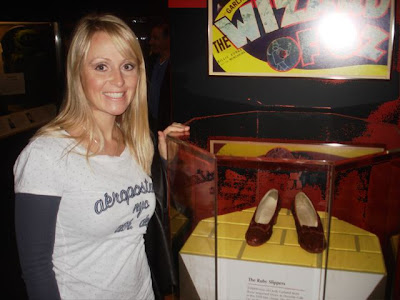 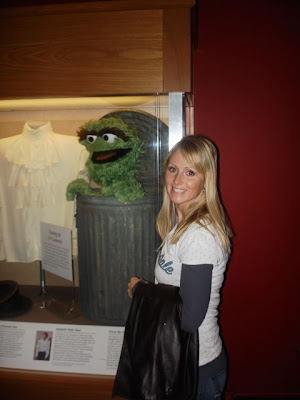 Oscar the Grouch
Coby seems to think that I found my "twin" in this picture!! 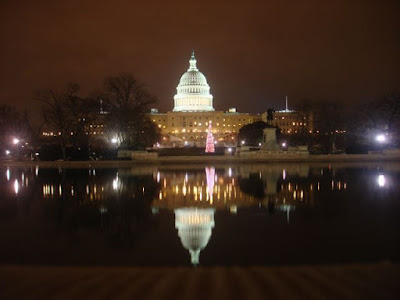 The Capital Building at night.

About 6 weeks ago...(I know I'm a little behind) Coby took me on a trip to Washington DC. It was sooo awesome. He was there on business. Washington DC is truly amazing. It's almost overwheming at the amount of history that is there. I wished that we could have spend as much time as we wanted exploring all of the MANY museums there. We went to the Air and Space Museum, National Gallery of Art. I wished I would have taken a picture of this, but there was this really disturbing painting of this man about to be eaten by a shark. Creepy! Then we went to the Musem of Natural History, American Heritage Museum, the Holocaust Museum. The Holocaust was truly awesome. Somewhat of a downer but very very well done. It was so organized. Oh, how I wished I could have stayed longer. Best of all, everything was FREE!!!! I love to spend a week or so there and really take in all the sights. It was amazing. Thanks baby!
Posted by Tiffany at 12:09 AM 8 comments: 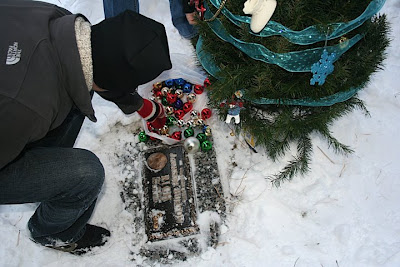 I couldn't find the good picture of Jack's head stone...but this will have to do for now. We put a little soccer ball and a little lamb ( I used to call him "Lammy") Originally we were told that we were looking at it taking up to 12 weeks and then if the ground was frozen...we'd have to wait even longer. We were so happy when we found out that Jack's name plate would be in before Thanksgiving. I was just another little blessing from the Lord! :)

This year Joanne suggested that we should decorate a little Christmas Tree just for Jackie. We invited our families from both sides to help. Everyone brought an ornament to hang on the tree. I turned out so beautiful. 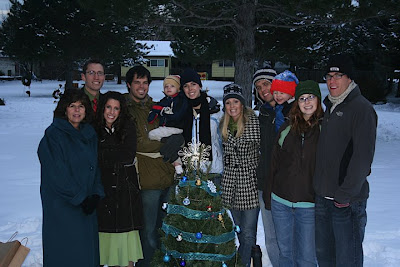 After we were finished decorating we sang "Silent Night". I lost it especially when we sang the part about "Holy Infant so tender and mild...sleep in heavenly peace...sleep in heavenly peace." I miss him...so much. Not a second goes by when I'm not thinking about him and missing him. I know he fulfilled his mission here on Earth but it just doesn't make it hurt any less. I am so grateful though that I had the chance to know him and love him and be his mom. I know he watched over our family and I feel him close all the time. I try to be positive about our situation because it feels better than the alternative...but I still have breakdowns. Sometimes they aren't too bad...and other times they are gut renchingly painful. I had such a night a few weeks ago. I was so distraught, it was almost like I was back at the beginning. I couldn't even speak without gasping for air. That night I tried with all my might to try and see Jack in my mind by my faith. It didn't end up happening, but I was able to feel him so close almost like he was touching the back of my neck with his hand. He was there, I know it. I just wish I could see him. I know that that would probably just make it harder...but I just miss him so much. The next morning I think he came again to say good morning. And tell him that he was still there. Jack had these little kissing monkeys in his room (they are still there). You pull them apart and they say..."Kiss me!". We that next morning I went to the gym early and when I got back noticed that Corbin had crawled in bed with Coby, so I crawled back into Corbin's bed. I was all alone and heard those monkey's go off...."Kiss Me!". Then it happened again..and again. Those monkey's went off 6 different times before I jumped up and ran into Jack's room. When I got there they went off again. I scanned the room hoping that my prayer would be answered and I'd get to see my baby. I said, "Jack...I know you're here....make the monkey's go off again if you're really here...." So OF COURSE they didn't go off. Typical Jack....Never wanting to perform just because I asked him to! :) That little stinker!!

Coby was there that horrible night and helped me through it. He's such a trooper and doesn't get the credit he deserves. He's so strong for our family and without him I don't know what I'd do...probably not get out of bed. He's my rock and I love him more than anything. It's because of him that I had Jack in the first place. And it's because of him Jack is sealed to us forever and because of that I'll get to see Jack again. What a blessing!
Posted by Tiffany at 11:36 PM 11 comments: 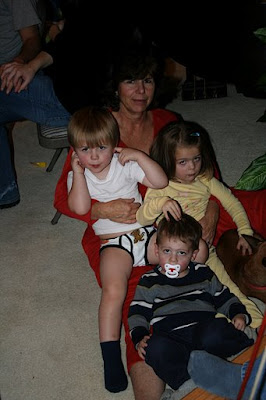 I know this isn't the GREATEST picture of Corbin...or anyone else for that matter...but it was a picture that showed Corbin wearing his "big boy" underwear. Scooby dooby dooooo....displayed in all it's glory! :) I am so proud of him. I seriously tried EVERYTHING...and nothing seemed to work. Then one Monday (the day before Cob and I left for DC) I let him run around all day with OUT a diaper. He was pretty good and didn't have any accidents. Joanne (Coby's mom) kept telling us that Corbin was ready and that we needed to just start having him wear his underwear and that he'd just learn. SO...that's exactly what we did. We tried it out for about a day...then gave him to Joanne to finish the training. I'm not sure she was terribly excited about that...but hey...she asked for it! AND we delivered!! :) In a nutshell, he has a few accidents every now and then but he's 99.9% officially potty trained! My little boy is growing up...and this part I don't mind! :)

SO, if you're looking for a certified official potty trainer...drop your kids off at Joanne's. Don't tell her where you got her name from...but tell her she came HIGHLY recommended! :) 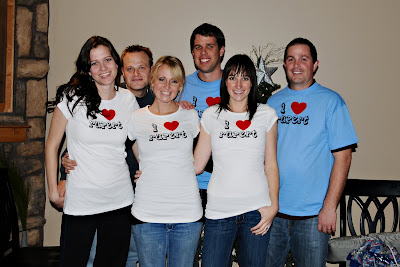 Here is a picture of some of our best friends we made while living in MI. Mandy made this great spread of cheese and fancy chocolate fondue! We had a little trouble with the fondue cooperating...but all in all it turned out to be a GREAT night! Then we a white elephant party. I'm pretty sure that Mandy got the best present and most creative white elephant out there...it was a "shave your legs Barbie" I wished I would have taken a picture!!! It was so gross. Barbie had hairy legs and armpits and came with a disposable razor. Gross....but hilarious! Then Lance and Bettie gave us all these totally awesome shirts that say..."I love Rupert"...in leiu of Lance winning Prosecuting Attorney of Rupert County, ID. I love them! I wear mine all the time.

We had so much fun! We love you guys and are so grateful that we have managed to stay in touch and stay close. We are so looking forward to many many more adventures with you all! LOVES!!!
Posted by Tiffany at 11:16 PM 6 comments: