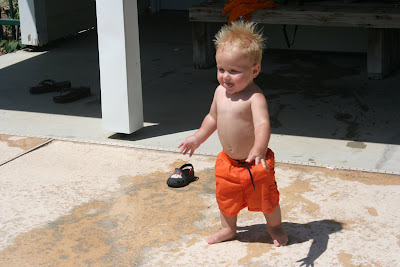 The last few days have been to say the least, hard as heck. I can't stand that Jack isn't here. I thought I was doing okay and then Thanksgiving rolled around. I AM grateful for so many things, but I'm not thankful that I can't be with my Jackie right now. Why is he gone? WHY? I know the logical and spiritual answers, but none of them actually bring him back to me. It just doesn't seem fair that everyone else gets to watch their families grow up and we had to put ours to rest. I know that we all have trials and all deal with heartache at different times in our lives, but this...this seems too much to bare. I know that we probably agreed to this before we came here, but was I not paying attention to the "fine" print? Did I see the part where Jack would be taken at only 16 months?? I'm not angry. I'm not bitter. I'm just a little sad. I cling to Heavenly Father because it's through him that I get my peace. But why Jack? Why isn't he down for his nap right now? Why can't I watch him sleeping while his stomach moves up and down? Why isn't he watching Corbin so intently as to figure out how to be just like his big brother. Corbin will never know him or play football with him. Coby can't just take his boys to professional game and enjoy just spending time with them. It breaks my heart. I know that Jack is still here and that he watches over us, but it's not enough. I didn't get enough time with him. I know that this life is but a second in comparison to the grand scheme of things, but it sure seems long. I don't even know what I'm typing anymore. I can't even see the screen.

And there shall be joy... 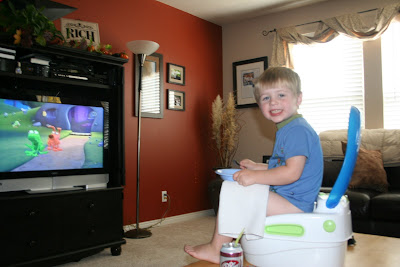 What a proud proud day it has been thus far this morning and it's only 8:15am!!! I feel like we've been working with Corbin to get potty trained FOREVER! He just refuses!! He doesn't like underwear, so Lanae suggested we get boxer briefs so he could be more like "daddy". When that didn't work, I took him to the store and let him pick out the biggest toy and told him that when he only used the big potty he could have it. That didn't work. Camille kindly let us borrow her "I can go potty" video. I got some great tips, but Corbin could have cared less about applying the info and was more interested in watching it over and over again! I seriously have tried everything from pouring warm water over him to serving him lunch while he watched World World and drank a Diet. Dr. Pepper. What could be better? And STILL, after hours of just sitting on his "little" potty, he'd get up and then go...NOT ON HIS LITTLE POTTY!!!

But Today was a little different. This morning he called up the stairs after Coby and said, "Daddy, I need to go potty." Now normally when he says this we get excited, get his little potty ready and stick him on it...without any luck. But today, today was different. He told Coby he needed to "go" and so Coby got him "situated" and then I heard music...shear music to my ears..."Hon...has he ever pooed on the potty before?" I said,...."Um...NO....DID HE?" and to my wonderous suprise I got a whopping YES!!! With that I ran to the pantry and found his basket of wrapped toys (courtesy of Honey), just as he ran to me and said...."Mom...where's my present...?" It was said so sweetly and I was so proud!!! I told him that he could stay in his Jams all day! :)

On a side note I have to believe that those parents who get the privledge of raising their children in the 2nd coming...there will be NO POTTY TRAINING NECESSARY!!!! It's wishful thinking anyway!
Posted by Tiffany at 10:22 AM 29 comments: 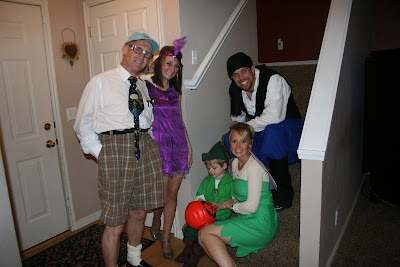 Poochie was a nerd..., Som was a flapper girl, Corbin was Peter Pan, Coby was Captain Hook...sort of and I was Tinkerbell...naturally! 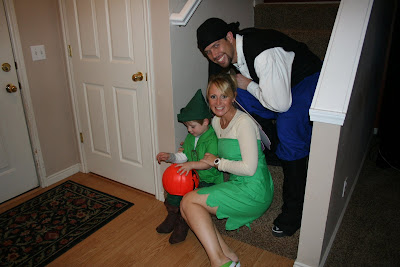 Our cute little Peter Pan Family...and one invisible angel unable to actually be seen...be he was there I'm sure! He wouldn't miss it! 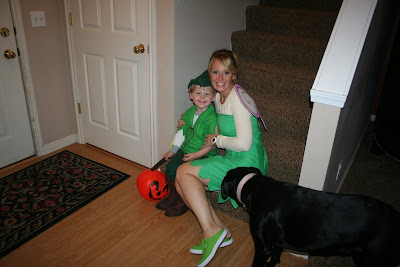 Me and my little monkey! I just love this picture! 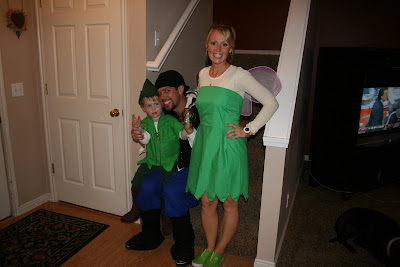 Finally, we're all looking at the camera! 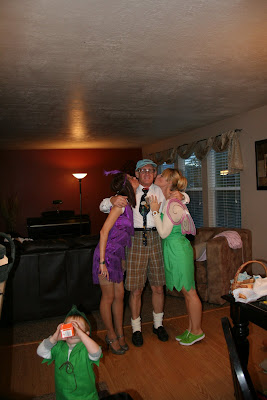 Kiss Kiss! I've often heard that the "nerd" gets the girls!! I tried to Photoshop Amber in...but couldn't figure it out! Next year right Rhonda??!! 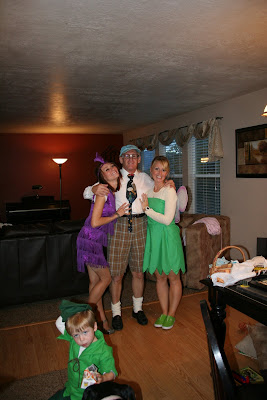 Poochie and his hot girls...minus one! 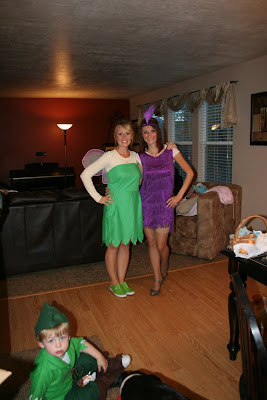 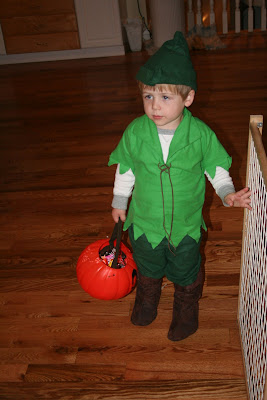 My little Peter Pan. Thanks to Mandie for sewing his costume! She's a pro! 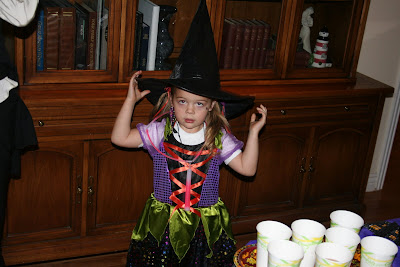 There's the cutest little witch I've ever seen! But to Corbin she was his Wendy! 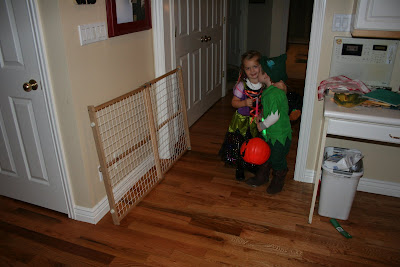 He couldn't wait to greet her with a little smooch! 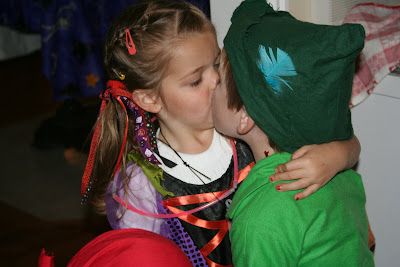 And neither could she!! Hot and heavy! Just kidding, they're cousins of course...(kissing cousins...and we're not even in Alabama or anything!) 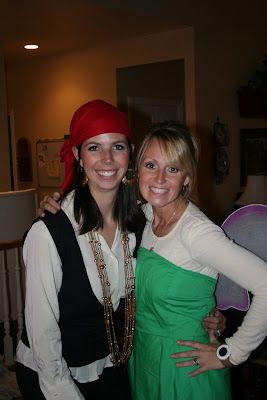 
This our first Halloween without our little moofalotta. It was sad, but I know that he was there...somewhere. I just wish we had "visitation" rights. So we could get him every other weekend and on Holidays! Wouldn't that be nice!

Anyway, we had the awesome opportunity thanks to great family members who not only let us borrow their costumes, but actually sewed them as well! Lanae and Anna-Lisa...you guys are awesome! Thanks so much!

First we went trick-or-treating through the neigborhood. But the first place Corbin wanted to go was the really creepy and terrifying house with all the ghosts, clowns and blood. All month long he wants us to take him to the most creepy house on the block, over and over again! He just loved it! He was sad when everything was taken down the day after. He's like me...I love to watch things that scare me...and like to watch them over and over...I guess to desenitize me. I'm a nerd what can I say! So we all went trick-or-treating with my mom..who was "tickled pink". She wore pink and had a feather! Cute! While my dad the "nerd" opted to stay home and hand out the candy...or watch the game...I'm not sure which! :) Then after seeing our friends we closed shop and headed to Coby's parent's house for a little more candy! They serve hot cider and donuts every year. I think they said that they got over 200 kids this year! Wow! That's a lot of donuts! Joanne was little red riding hood, and Jim was a hippy, I think. Ben, Whit and Mason were a family of pirates with one adorable witch! After trick-or-treating in two great neighborhoods, you can imagine that Corbin completely made out like a bandit! We have enough candy to last us through the rest of the year. I hope we make it, because chocolate doesn't usually last long! I bet Jack is wishing he was still here because he loved chocolate too! Soon...baby...hopefully soon! But until then...the chocolate is MINE! :) 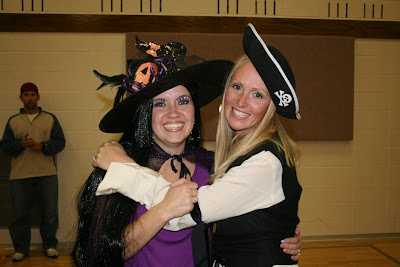 One hot witch Camille and me 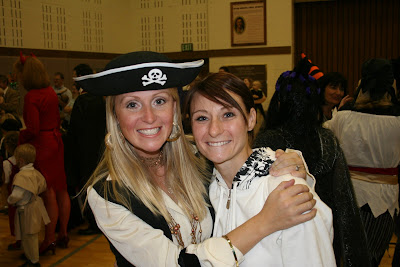 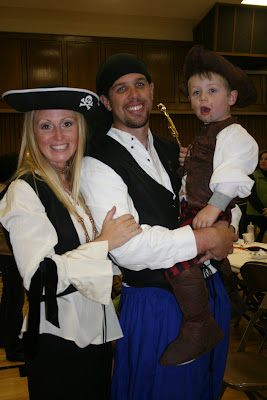 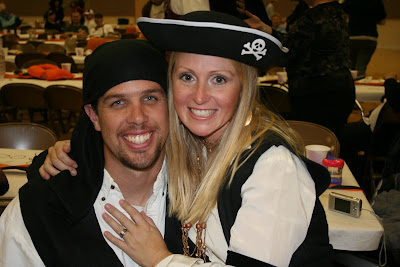 My hot pirate and me 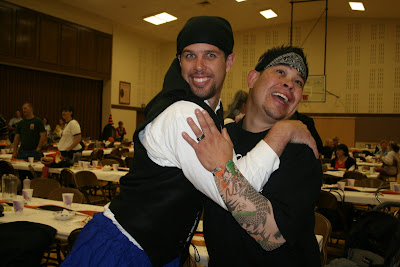 Two boys who think making fun of me and Camille is cool!!!
*Note* I didn't find this out until about a week later when Camille and Coby had to tell me! Those little stinkers!!! 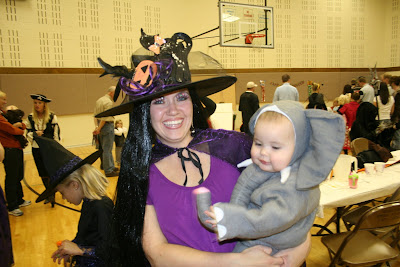 Camille and her little elephant, Samantha 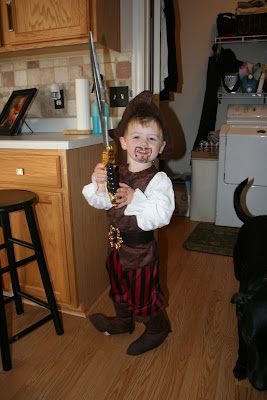 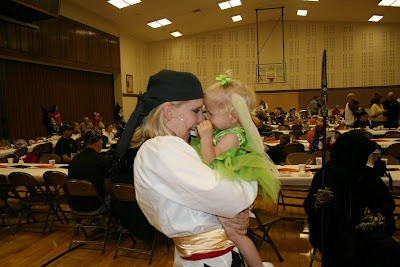 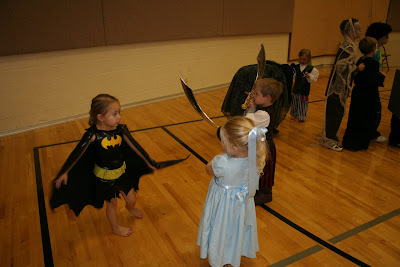 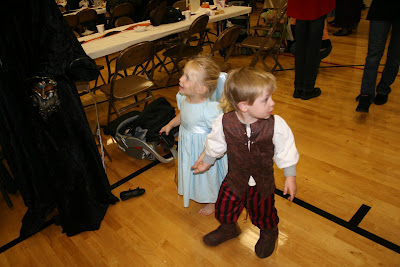 Roxy was taking her pirate to find a sword. It was cute...she just took his hand and led him away. 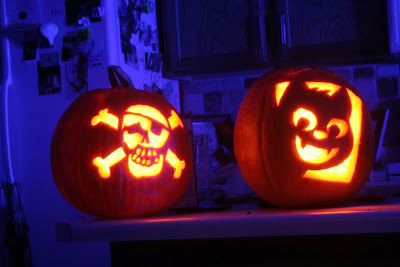 
This was our second annual Ward Chili Cookoff / Halloween Party. It was sooo much fun. I made chili, that of course didn't win AGAIN! :) But it was so fun to hang out with the Siebenbergs, Secors and Sloans. We had way too much fun. I laughed a lot...which was good. My cute cousin let our entire family borrow everything. She's got connections! ;) It so good to finally have friends...so close! I wanted to move about 3 months ago...but now I don't think you could pay me leave! I love it!
Posted by Tiffany at 9:15 PM 8 comments: