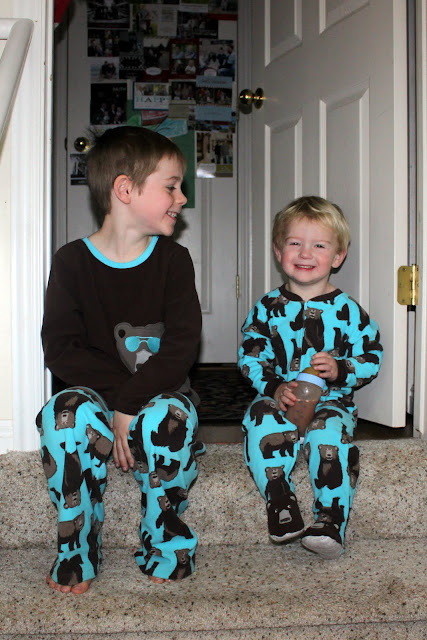 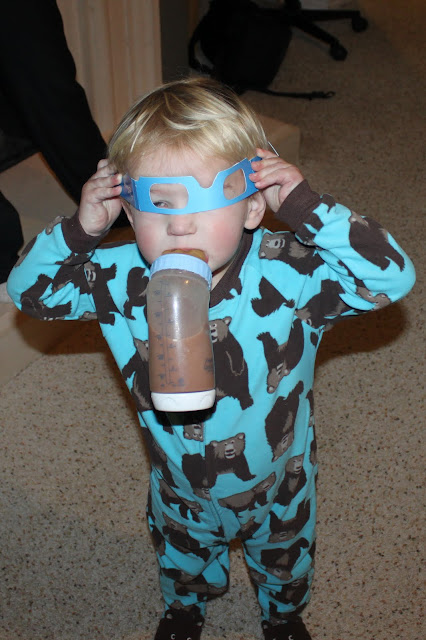 Jaden was ready with his 3D glasses and his Hot Coco of course. 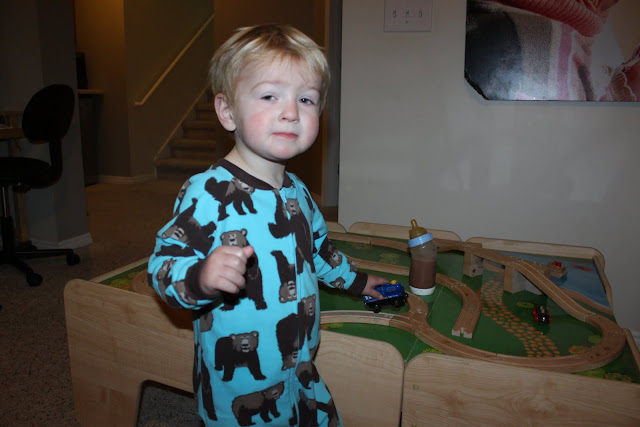 You can't really tell, but Jadesy was stoked about his new Train Table and train set.  He LOVES trains!  Every time we go to Gardner Village he wants to head to the toy shop with the wooden train table.  It takes FOREVER to get him out of there. 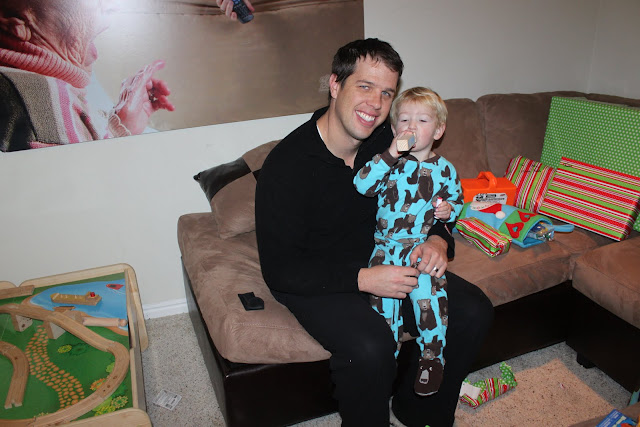 He even got his very own TRAIN whistle! 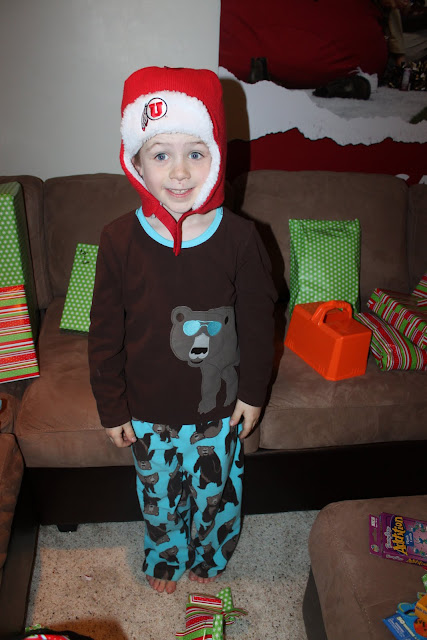 Corb is an official UTE fan and LOVED his new and VERY warm hat. Jaden has always loved things that light up or is it things with buttons??!!  I guess it's both in this situation! 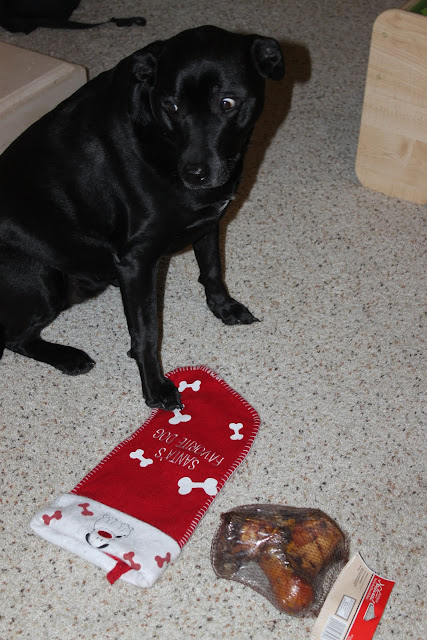 Don't worry, PUP wasn't forgotten.  She got a HUGE puppy bone in her stocking. 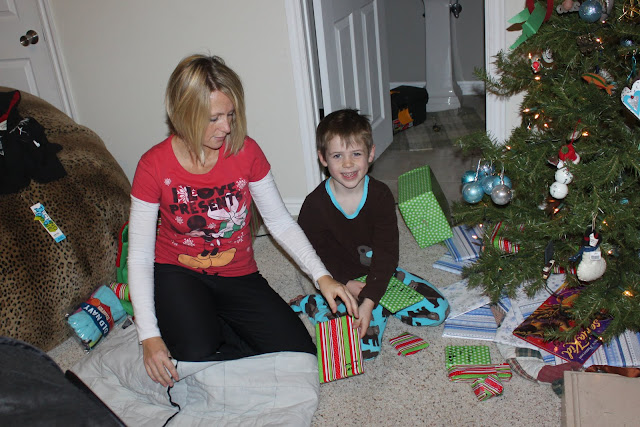 Corb was so sweet.  A few weeks ago, he and Coby had a Father/Son shopping day.  He used all of his allowance money he'd been saving and bought us all Christmas presents.  Here is one of the presents he got for me. 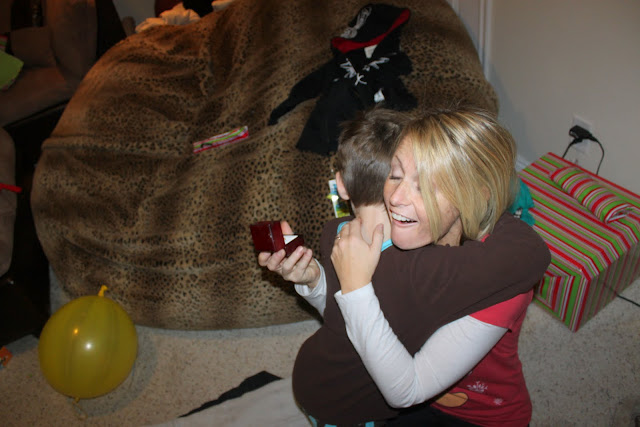 He bought a ring for me at school and wrapped it up in my original engagement box.  I LOVED it! (As you can clearly tell from my buck-toothed smile) 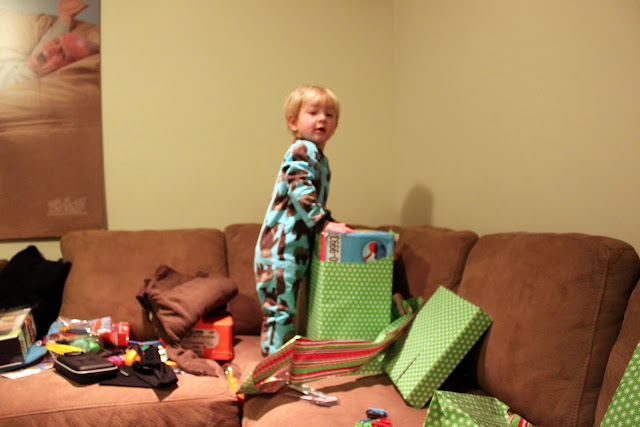 Jaden found his Thomas the Train Big Wheel bike and kept saying...."Oooooh, it's a BIIIIIIG ONE!" 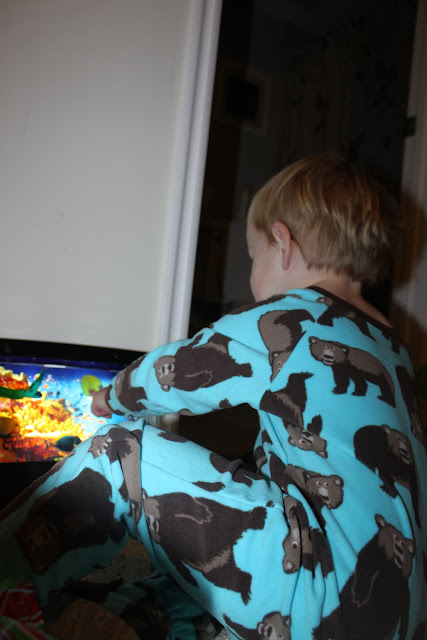 He liked "Dis one..." the big yellow fish on his rotating reef night light. 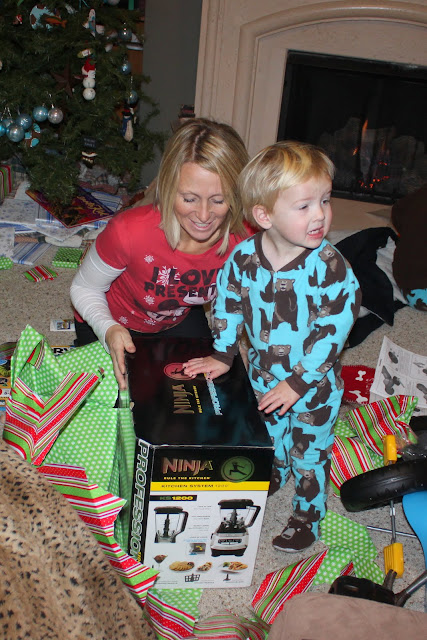 Then they helped me open my BIG present....the Ninja 1200!!  Coby you are the BEST!  I love it! Our blender finally broke after 8 years and I've been begging for another one ever since.  I actually watched an infomercial all the way to Mexico for the Ninja 1100 Blender.  To say that it's pretty awesome is the understatement of the century!!  Thanks BABY!! 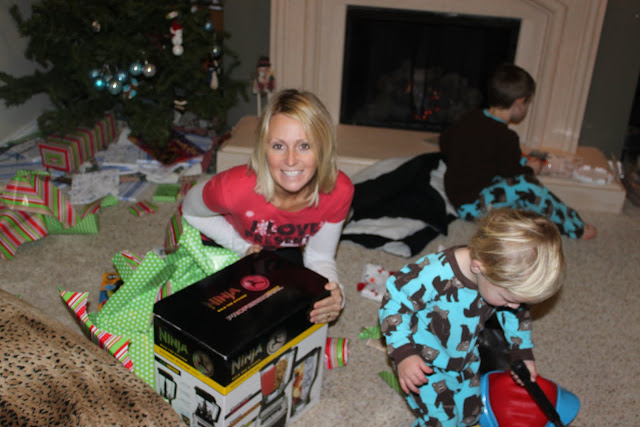 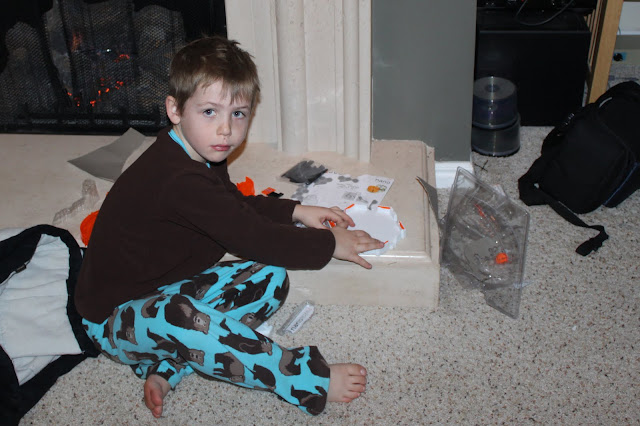 Corb was LOVING his Hex Bugs.  Coby got a little ramp for them to buzz around in and Corb couldn't wait to put it together. 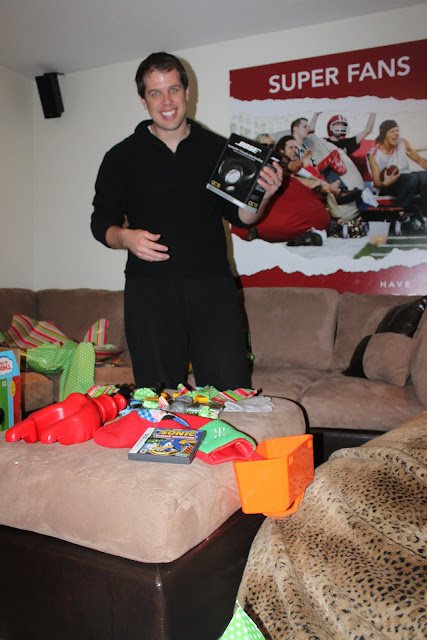 Coby's been wanting some good headphones.  So, with the help of his brother Pat and co-worker Randon, I was able to surprise him with the right ones.  I think he liked them!  I tried them on and they are actually pretty amazing!! 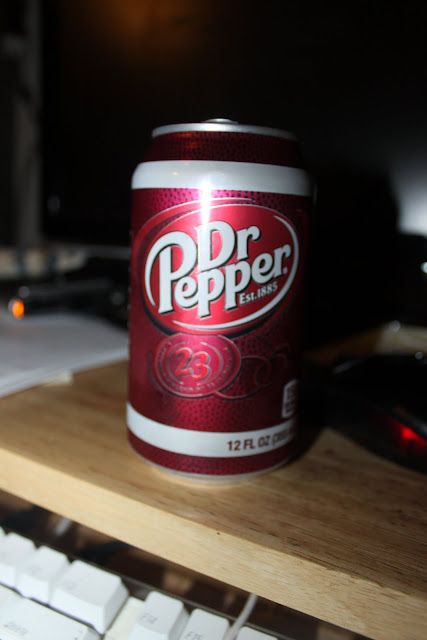 After all the present opening excitement...a Dr. Pepper was officially needed...For Coby anyway! 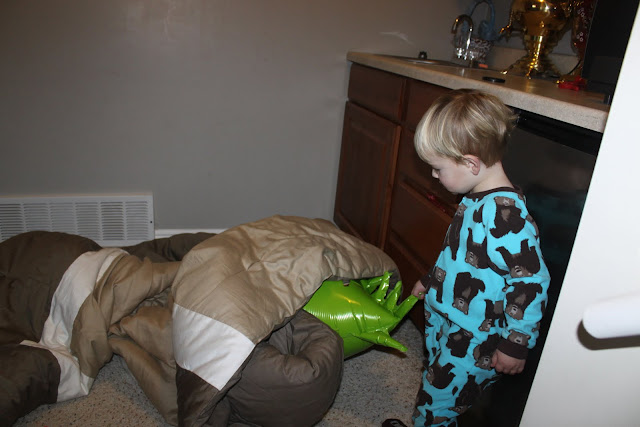 Then Jaden noticed a little something hiding under a comforter.... 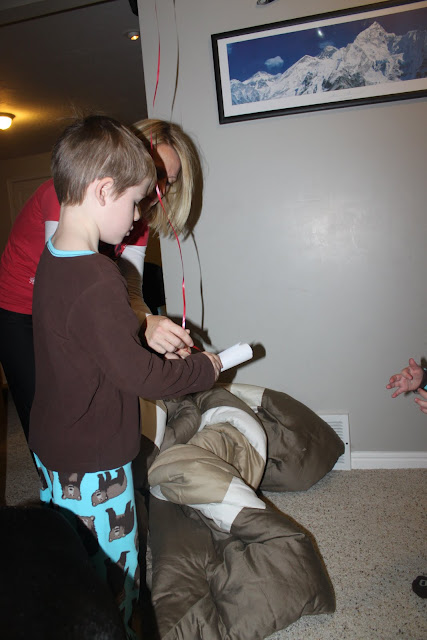 Santa was EXTRA creative this year...attached at the end of the balloon was a scroll with a message on it.... 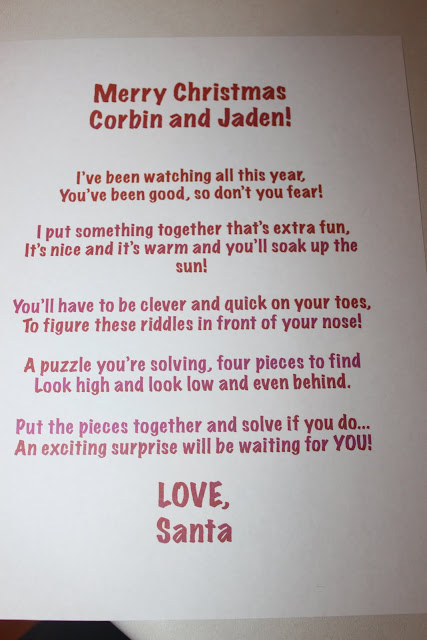 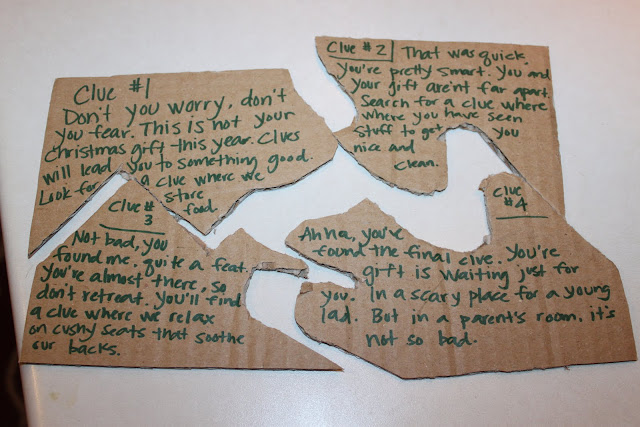 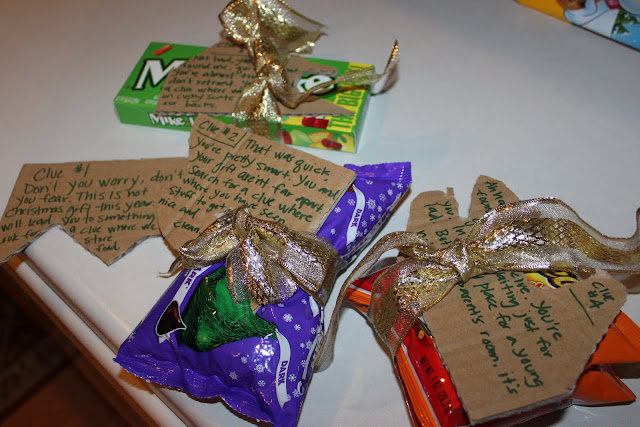 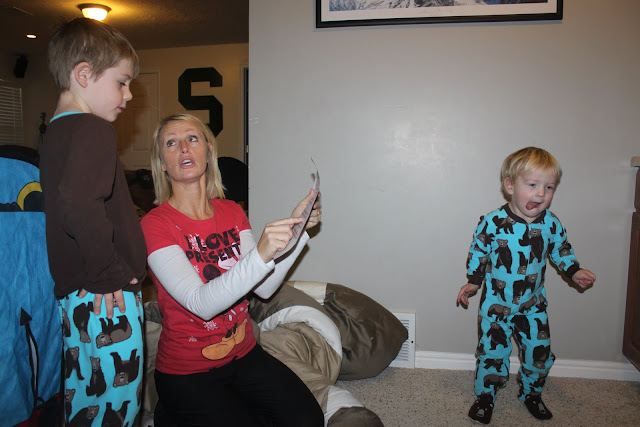 Corb used his good reading skills and was able to find all the locations of the hidden puzzle pieces... 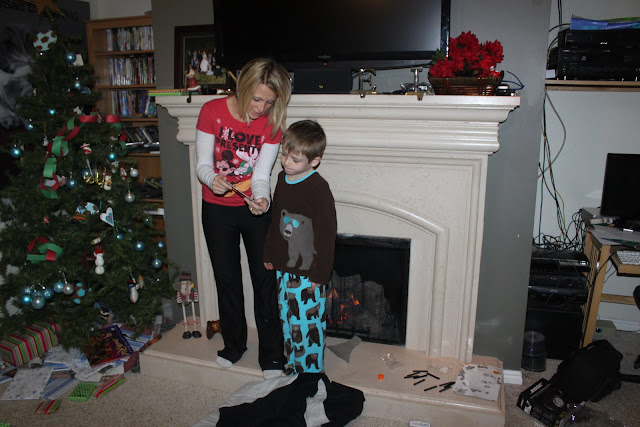 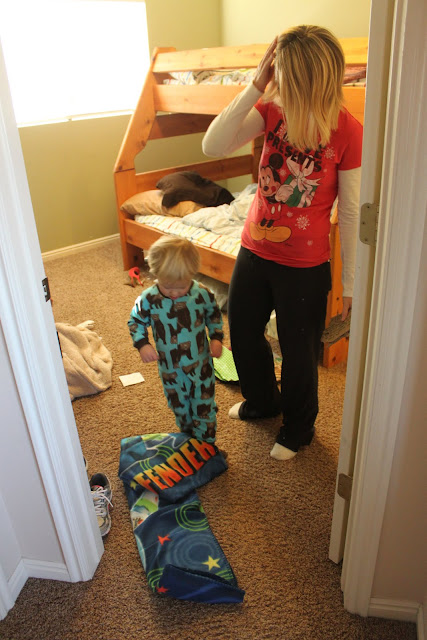 Jaden also got into it and was excited to go running through the house after his big brother. 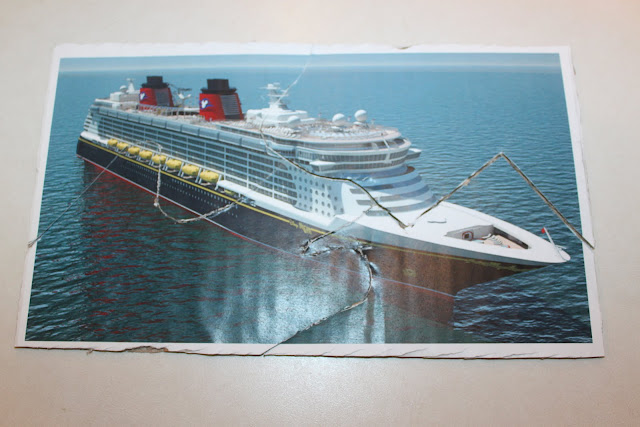 And here's what the puzzle looked like all put together. 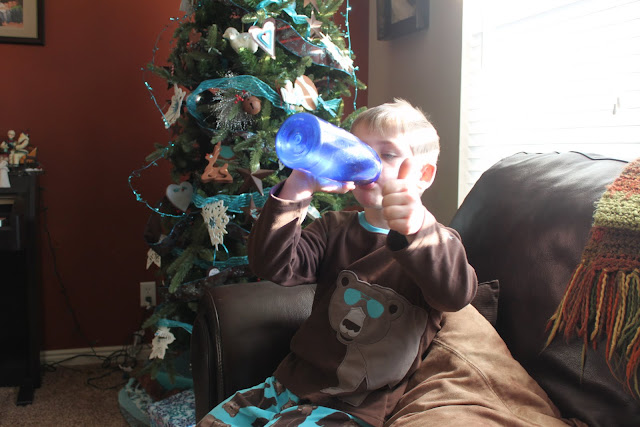 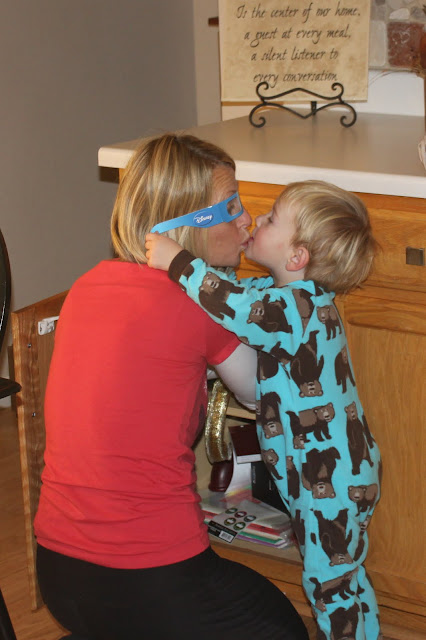 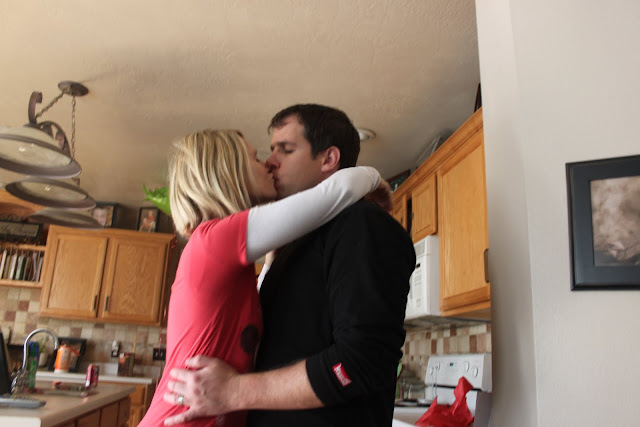 But this girl was the happiest because she has the BEST family EVER!!  This Christmas was awesome!  It's funny because every year we say, "Wow...we overdid it...Next year we are doing WAY less!"  I love my little family so much.  I am so thankful for the reason for the season.  I am thankful that because our Heavenly Father loved us so much He sent His Son.  And because of that....Jack will be with us again along with our entire family.  I believe it with all of my heart and I have Him to thank!  I feel so blessed to be where I am.  Glad that we have 3 years under our belt and are not at the beginning.  It still doesn't make it better, but it makes it bareable.  He is good.  And I love Him with all of my heart.  Merry Christmas!
Posted by Tiffany at 5:30 PM

Are you still watching infommercials?! I remember one time waking up in the morning or maybe it was late at night (we had fallen asleep on the couch) but I woke up to you ordering some exercise equipment. Haha! Maybe, Coby you will probably agree with me, you should stop watching infommercials! :)