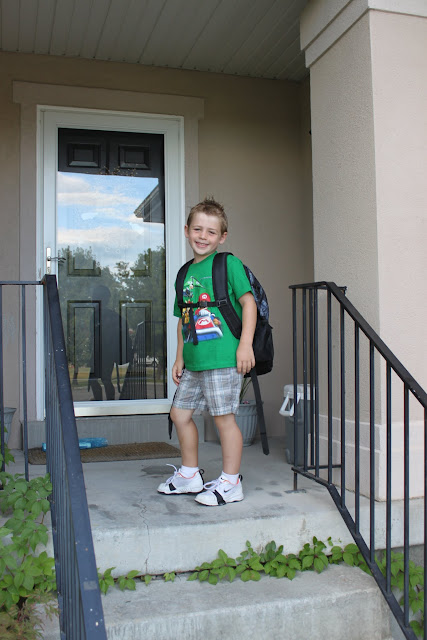 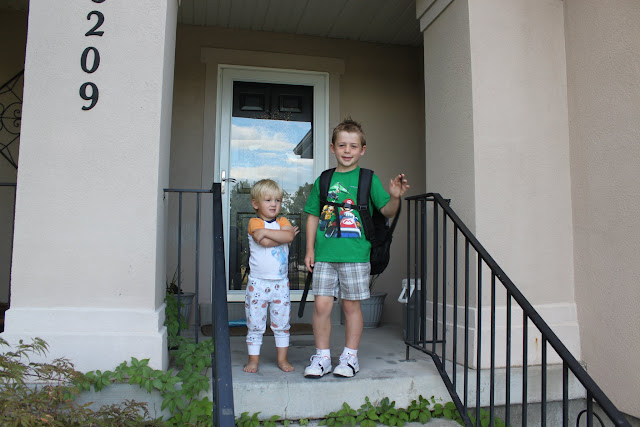 Even Jaden had to get in on the action.  Although, he was only excited until Corb left...then he was sad.  He kept asking me "Waer's Coorbin..."

Last night he requested that Coby give him a Father's blessing before school started.  I love that he asked and I loved it even more that Coby could do it.  My dad always gave us Father's Blessings to start the new school year off.  Coby gave him a beautiful blessing and we felt like Jack was there too.

Corbin was SO excited for school to start today.  I'm not so sure that he's excited for school, so much as he's excited that the gets to see all of his friends again.  He couldn't wait to put on his new Mario Kart shirt, Nike Shoes and Nike Socks...(because they both make him run faster...just like his friend Colton who wears Nike and is apparently the fastest runner.)  He fixed his own hair, got his own breakfast (his choice), and threw on his book bag and was ready to head to the bus stop about 45 minutes before the bus came!

We're certainly excited for him...and sad all at the same time.  I can't believe that he's a 7 year old going into 2nd grade.  In my head, he's still my little 3 year old!  He's growing up too quickly.  It's been a fun summer and I have loved (well, mostly loved) him being home this summer.  Jaden has been in heaven with his big brother around.  And he's such a GREAT big brother (when he's not teasing Jadesy).  Jack must look down and get a tichy jealous that he's missing out on all the fun.  There's no doubt in my mind that Corb would have been an amazing brother to Jack.  I'm sure they would have been two peas in a pod.  I'm sure Corb would have shown him the ropes this year (since Jack would have started Kindergarten in he were still here.)

I love it!! My little Corb is growing up!! I had so much fun with him!! 2nd FREAKING GRADE!!! Seriously where does the time go?!? Oh, I love that "little" boy!