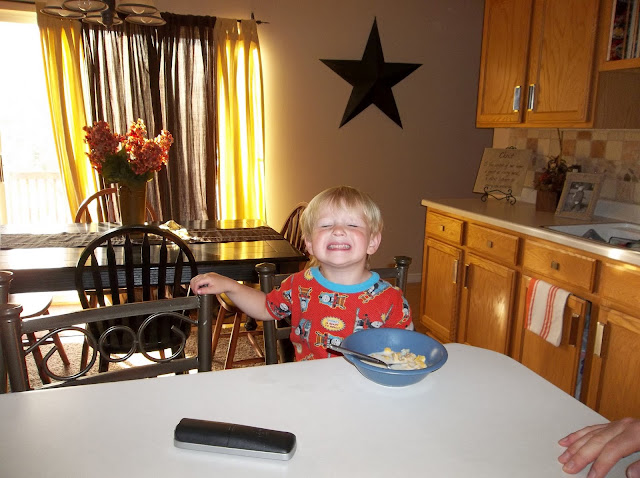 I could eat this little boy up every single day!  He is definitely MY child!  He is stubborn, full of drama, a screamer, very independent, very loveable, a good sleeper, a breeze at pottytraining, loves to give smooch-a-roos, loves to be held.  In fact he still says, "Hold You", and I can't help but NOT correct him because it's so cute.  He changed from calling Corbin "Bobbill" to finally calling him "Coorbin".  It's sad...  He LOVES to smile and laugh, loves his "high coco" first thing in the morning, loves to wear his jams...ALL DAY and it's a CHORE to try and get him out of them.  As of late, we've had to put his church clothes OVER his jams to make it to church at a reasonable hour! He loves to help me cook (he's constantly pulling his chair up to the counter and helping make smoothies or cookies or anything else that might require his help...and every time he adds something new he says, "And nowwwwww we need...."  He's a HORRIBLE eater!  He loves to wear my lip gloss and usually loses the caps! 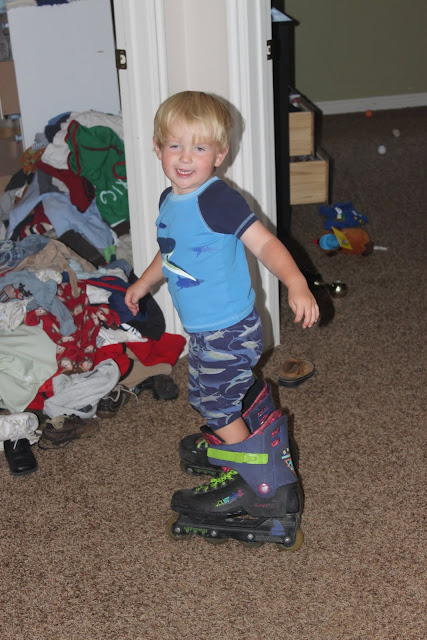 He LOVES to try new things.  Today as I was switching out his 2T clothes for his 3T ones, he found some roller blades.  I tried telling him that they were too big...but that didn't stop him from trying it out for himself!  He loves to play in the hose.  He loves to watch Flushed Away, the Sandlot, Little Monsters, Monsters Inc, Monsters Vs. Aliens and Harry Potter.  He loves to sing.  He sings ALL the time.  Some of his favorite songs are "Oh what do you do in the summertime, Popcorn Popping, Lady Gaga's Bad Romance...(I know...don't judge me), I'm Elmo and I know it, LMFAO - Party rock anthem (Everybody's Shuffling), Itsy bitsy spider went up the waterSHOOT, Jesus wants me for a sunbeam, We are YOUNG by Fun.  He loves to workout with me when we're leaving the gym...he tries to get on the ab machines.  He loves older girls and will friend them first before little boys his age. 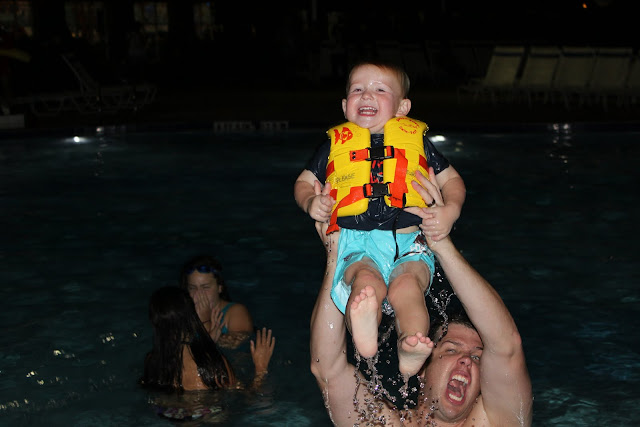 He adores his dad and loves to help him do anything...mowing the lawn, fix things with tools (that I break), playing with flashlights and taking them apart and LOSING the pieces!! He LOVES to watch home videos...especially if they include him on them!  (Another trait of mine)  He ALWAYS sticks his tongue out when he concentrates...a definite RICH trait!  It's SO funny though!  He loves to swim and go on fast rides and gets mad if someone tells him that he's too small to ride.  He still loves scary movies BEST...just like me.  (**disclaimer - I don't let him watch scary movies other than Harry Potter...DON'T JUDGE ME**) 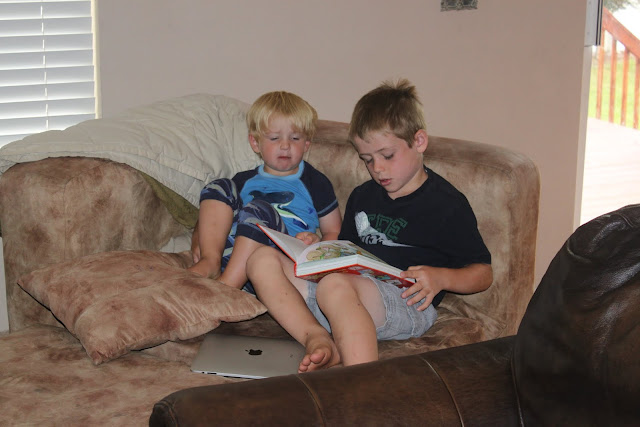 He loves to be with Corb above anyone else.  His Nana and Aunt Ambie are a close second!  If Corbin isn't teasing him, he's following Corb around like a little puppy.  Corb's usually pretty good with him.  He loves to listen to Corbin read, play his DS and the WII.  I love that he still put his head on our shoulders and pats our backs.  He's good about taking medicine.  If he thinks he hurt you, he's real fast to say, "I'm sorry Mommy or Daddy."  He loves to help me clean still!  I have to save the toilets for him or he'll get mad.  We take turns vacuuming and mopping the floors and stairs.  He's so good at telling us he loves us. And is always wanting to say the prayer.  It sounds like this, "Heavly Fadder.  Thank you for this Daaaaay.  Please bless the fooooood.  Thank you for it.  Name of Jesus Chwist AMEN."  Then he looks up and SMILES so big that you HAVE to laugh!  he loves to eat eggs for breakfast.  And heaven forbid I make a smoothie without him!  When he gets hurt he clinches his teeth, sucks in air and says, "Ahhhh...." while squinting his cute little face.  He loves taking baths and thinks he has to sit in the front. He still gives GREAT hugs and puts his head on your shoulder and even pats your back.  It's really sweet!  I hope it never ends! He loves Nursery, even though it's like pulling teeth to get him to go into the room.  But once he's there...he's just fine....yet another one of my many hand-me-down traits!  He's definitely got a temper, but gets over things rather quickly!  Every time we are in the car he says, "Dad...whatch-you-doing?!"  "Mom...Whatch-you-doing?" OVER and OVER and OVER again!  He never grows tired of asking us!  He loves to steal sips of mine and Coby's sodas and then tries to drink it all ON PURPOSE just to try and make us mad and then laughs an evil little laugh! 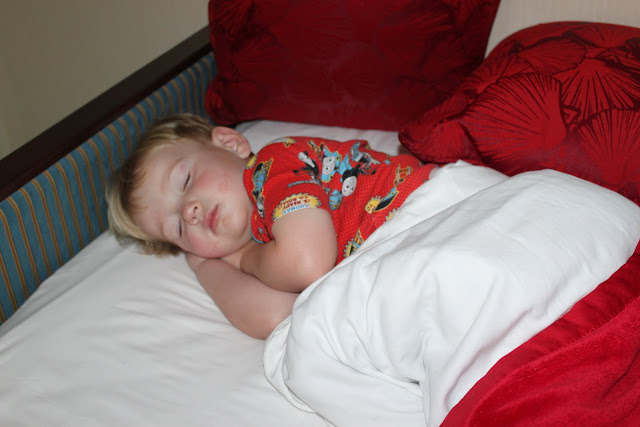 He's recently got potty trained!  And he was a PRO from the beginning!  It literally took a day and we have yet to have more than 1 accident...and it was only pee!  :)  He refused to use a pull up and sometimes we hear him getting up in the middle of the night to pee...he's 3!  We're so proud!  He's turned into a GREAT sleeper and was the ONLY kid we had that we didn't have to Ferberize.  He just figured it out by himself at 6 months. (Corb and Jack had to learn to scream it out...it was AWFUL)  He's a GREAT snuggler and thinks he needs to sneak into mine and Coby's bed in the middle of the night when we're so tired that we don't notice!  But by the morning when he's sleeping sideways and kicking our backs in a QUEEN sized bed...we're on to him...a little too late!  He loves to brush his teeth.  He loves to be chased around the kitchen and livingroom.  He loves to play hide-n-seek.  He loves to come up to you and try to scare you by growling. 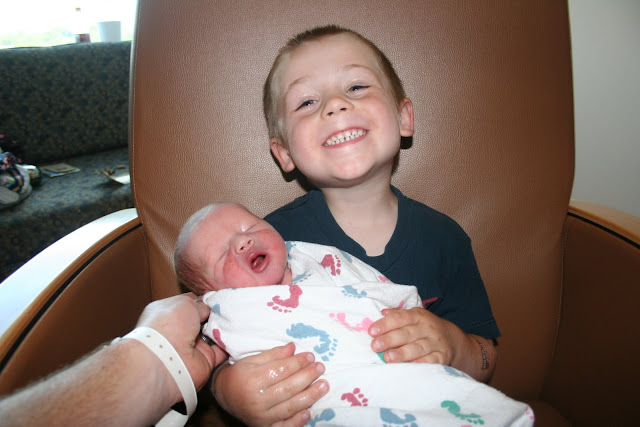 I can't believe how much he's grown....here he is a few hours old. 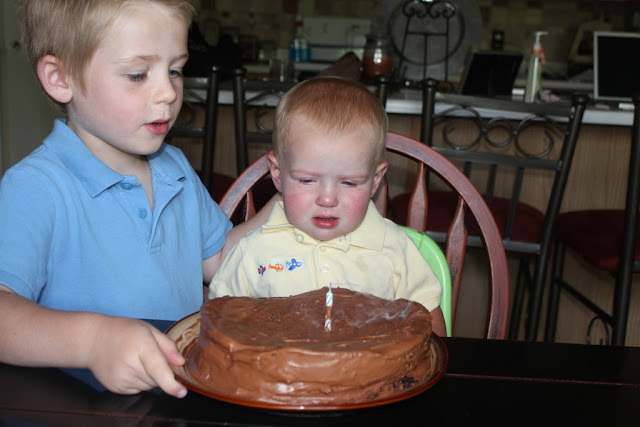 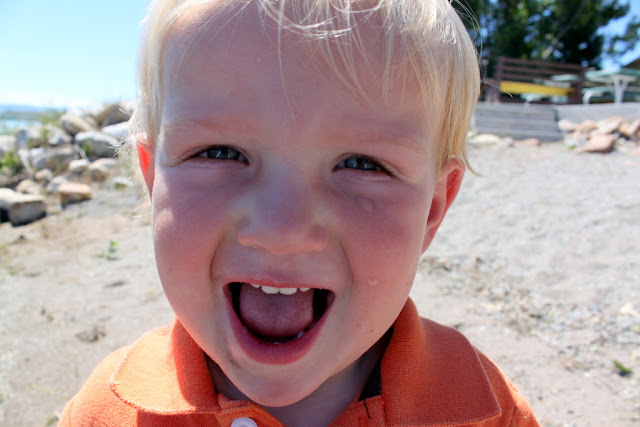 2 years...
I can't believe he's 3!!!  He tells everyone that he's 5!  He's a riot and I can't get enough of him!  I feel so blessed that this little boy came when he did.  He and Corb saved us.  They are our whole world and we are so lucky to have them sealed to us for eternity!  LOVE you little nugget!  Happy 3rd Birthday!
Posted by Tiffany at 4:51 PM